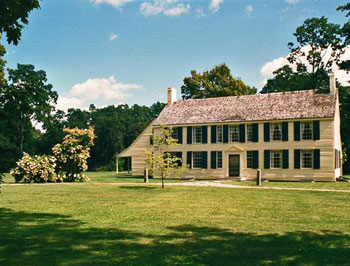 The General Philip Schuyler House was built in 29 days in November 1777. This home is now part of Saratoga National Historical Park. During the American Revolution, the British Army occupied this area. The beautiful home of American General, Philip Schuyler, was burned to ground. Following the surrender of the British, General Schuyler lost no time in replacing his home. He rebuilt this house using much of the glass, nails, locks and hinges salvaged from the burned home. From here, the General ran his extensive business affairs.

The Schuyler House was visited by many historic figures over the ages, including George Washington, Thomas Jefferson, James Madison, Marquis de Lafayette and President Franklin Roosevelt. Unlike many historic homes, this house was given to the U.S. Government as is. It has no electricity or running water and remains in much the same condition as it was in 1777. It is open from late May to Labor Day.